"Superintendent Ragsdale talks a lot about our Team. Our bus drivers and monitors are the first Team member many of our students and parents see every day. We want to do everything we can to hire the best and keep the best,” said Chief Operations Officer Marc Smith.

Safety-minded professionals interested in joining the Cobb Schools team as a bus driver or monitor should apply here. Specific questions about the bonus should be directed to the Payroll Department.

Emma Fallins drove a firetruck for 30 years. When she retired from a metro Atlanta fire department, she was not ready to hang up her keys to large vehicles.

So, she brought her decades of experience to Cobb Schools, where she transports students to and from school aboard one of Cobb’s big yellow buses.

For Ms. Fallins, signing on as a Cobb Schools bus driver has been her ideal second career.  “The kids are great! The schedule is awesome, and the pay is wonderful,” touted the veteran driver. 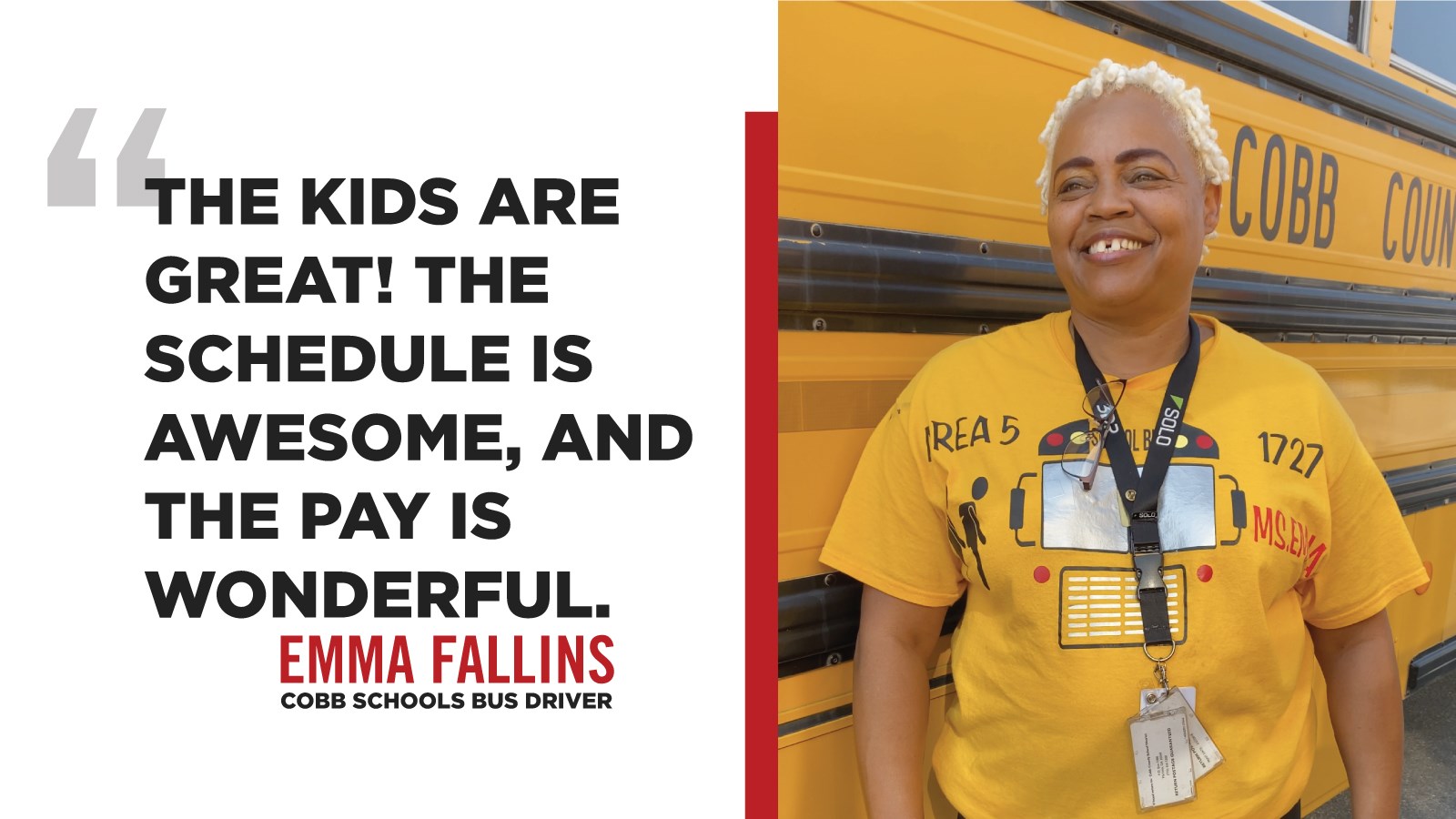 Being a bus driver also makes her feel a bit like a celebrity. Students flag her down in the hallways and in the stores around town, excited to see their favorite bus driver.

“I love my kids, and my kids love me,” Ms. Fallins added.

She is not just a smiling face for the students. She tries to serve as a role model, especially for the girls who may not have thought they could pursue a career with the Fire Department as she did. To help the students visualize their potential, she brought in photos from her first career.

“I try to tell the girls in the eighth grade and girls that are seniors that you can do it just like the guys can. If you put your mind to it, you can do it,” the Cobb bus driver said. Ms. Fallins is no stranger to Cobb Schools. All her own kids graduated from Pebblebrook High School, and now her grandkids are also part of the Cobb Schools family.

Her grandkids are one reason she loves her job as a bus driver. She gets to take summers off, like teachers, so that she can spend the summer with her grandbabies.

Mirta Maldonado, like Ms. Fallins, joined the Cobb Schools team of bus drivers as a second career. After retiring from the police department in New York, “Ms. M.,” as the students call her, moved south and saw the hiring signs for Cobb bus drivers. She had already spent a few years driving a bus in New York, and now she is doing the same for Cobb students.

“I get gratification from working with the kids. There are times when we sing along, especially with the kindergarteners and elementary students. They are so cute.,” Ms. M. said.

Besides the fact that she gets to drive her own grandchild to school every day on the bus, she shared several reasons others, like her, may want to apply to be a Cobb Schools bus driver:

Ms. M. likes her job as a bus driver so much that she recruited her husband to join the Cobb Schools team.

“If you are a person who likes to interact with people, especially little people, I would say this is the job for you,” Ms. M. added. 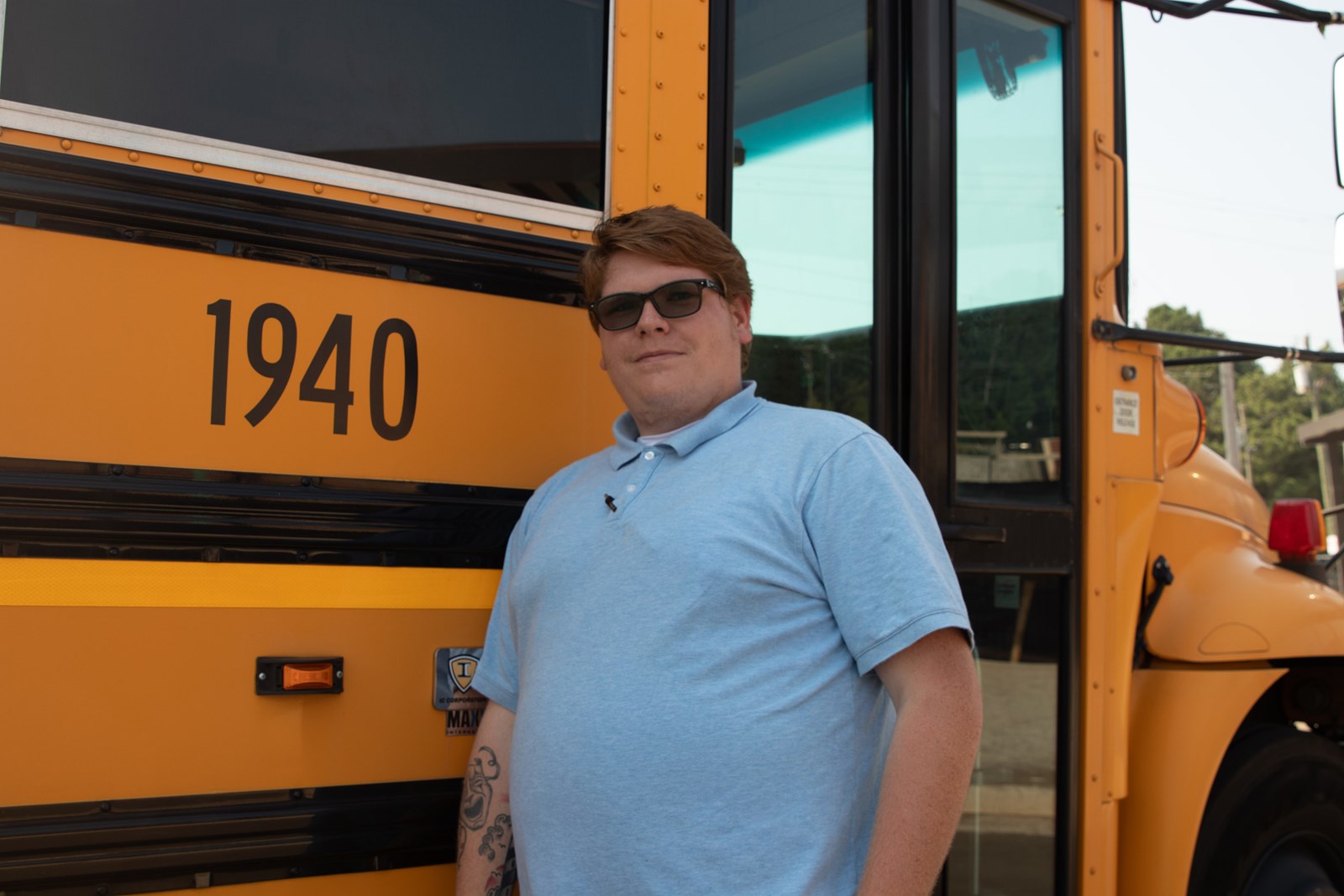 Brandon Kidd never saw himself in the driver’s seat of a big yellow bus. However, now he is looking at his current position not just as his first career but maybe his long-term career.

“I put in like 150 job applications during COVID trying to find a full-time job after I graduated and could not find one. I [then] saw that Cobb Schools was hiring bus drivers,” the South Cobb High School graduate explained after finishing his morning bus run.

The college graduate reached out to his middle school bus driver to get her opinion on whether he should apply. She told him to go for it, and he did.

“The more I drive a bus, the more I am looking at sticking with this long term because of the schedule and the benefits. It is all amazing! I couldn’t have asked for a better job at 23 years old,” Mr. Kidd added.

The relationships he has built with the students are part of the reason he loves his job. They notice when he is not in the driver’s seat and are excited when he returns.

“I couldn’t ask for a better bunch of kids,” praised the Cobb bus driver.

With the training still fresh in his mind, the college graduate is proud of what he accomplished to get the in-demand commercial driver’s license needed to drive a 40-foot vehicle, like a bus.

“None of my other friends can do that,” he said with a smile.