“The school bus has changed my life.”

“These kids have given me a new life.”

“Being a Cobb County bus driver has been one of the best experiences of my life.”

That is how District bus drivers describe their jobs in Cobb Schools and their role in safely transporting 70,000+ students to school and back home each day.

Those bus drivers now have an extra reason to smile as students step on their buses. During the August Board of Education meeting, Board members voted to approve a $5.25 per hour pay raise for Cobb bus drivers. Thanks to the raise, the starting rate for new drivers is now $25 per hour and ranges up to $33.32 per hour depending on their salary step. This is the highest pay rate for school bus drivers in the Atlanta metro area. The part-time job is also eligible for full-time benefits, including health, dental, vision, life, and cancer insurance. Safety-minded professionals looking to join the team can learn more here.

Bus drivers join the Cobb Schools team with a variety of backgrounds.

Stephen Williams traded in his 35 years driving a semi-truck for the big yellow bus in retirement. After seven years as a Cobb Schools bus driver, he still loves it.

“These kids have given me a new life,” said the great grandfather of eight. “Being a Cobb County bus driver has been one of the best experiences of my life.”

He enjoys interacting with the kids on the bus and watching them grow up. With a warm smile and friendly face, Mr. Williams serves as a role model for the students, helping them start their school day.

“You put something positive in their life, talking to them. We only spend a few minutes with them, but for a few minutes, you just don't know how many kids come back and say, ‘Thank you, Mr. Williams. I appreciate what you did, Mr. Williams,’” explained the veteran driver, who always keeps the notes he receives from students.

Just as his family encouraged him to serve as a school bus driver, Mr. Williams encourages others to consider applying for a job as a Cobb Schools bus driver.

“If you want to supplement your income, this is the best way because you have all holidays, you have our summers off and special occasions, you have off. You're doing something positive to help your future generation,” the veteran driver explained.

Some drivers, like Jack Fullen, were not professional drivers before signing on as a Cobb Schools bus driver.

“I spent 42 years in the bank systems and software business, and we traveled around after retirement. After that, retirement really settled in. I had all the honey-do projects completed, and I kind of missed the structure of having someplace to go every day,” Mr. Fullen recalled. 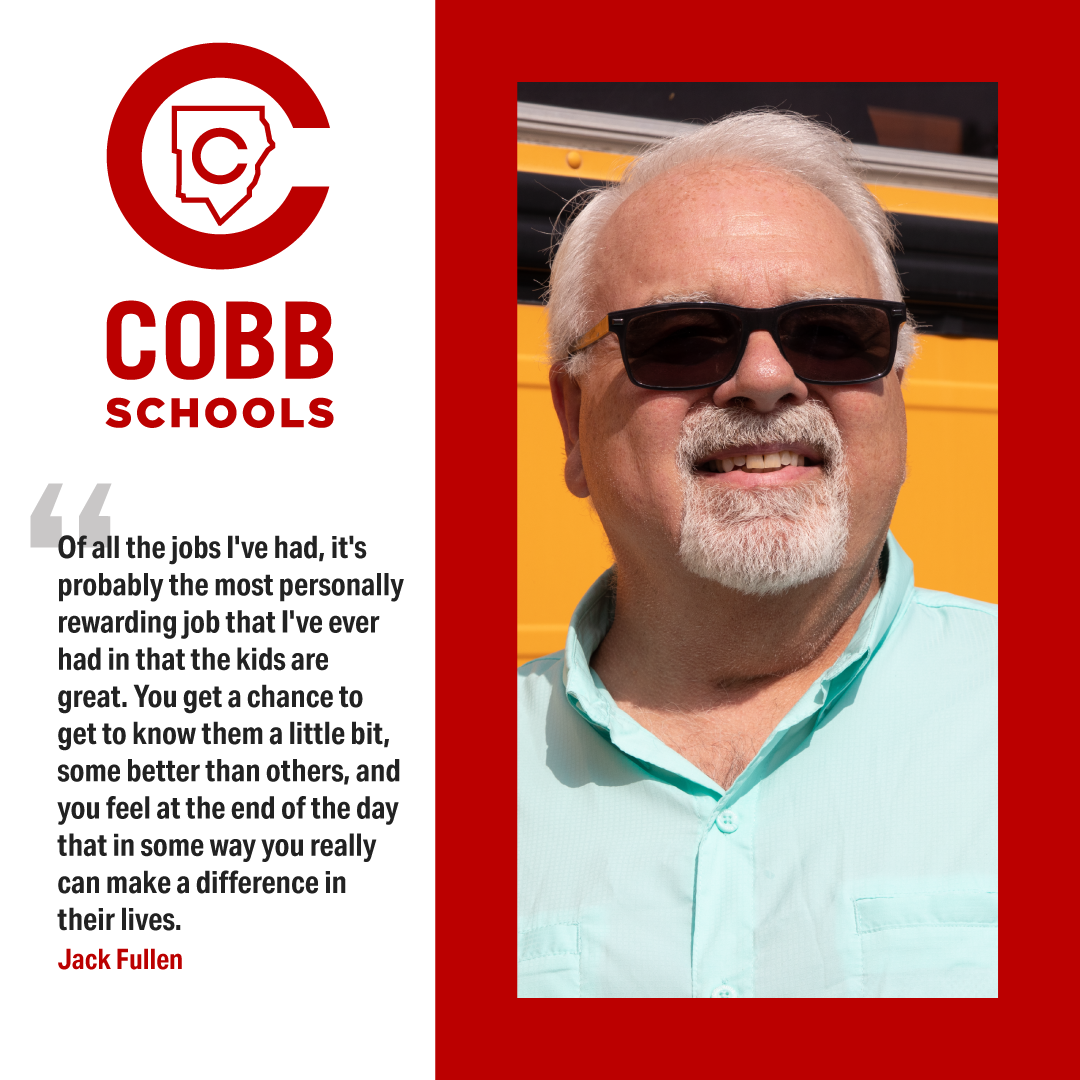 Spending time with his grandchildren at the bus stop and talking to their bus driver led him to apply for a position on the Cobb Schools team.

“Of all the jobs I've had, it's probably the most personally rewarding job I've ever had in that the kids are great. You get a chance to get to know them a little bit, some better than others, and you feel at the end of the day that in some way you really can make a difference in their lives,” explained the Cobb grandfather.

For him, one of the most significant aspects of being a bus driver is the relationships he builds with students. That’s exactly what he has been doing for over six years in the North Cobb area. The job also supports his life in retirement and keeps him young.

“It adds a good deal of structure in my life, that youth that kind of evaporates when you retire. I got up every morning for 42 years and had someplace to go and something to do, and this kind of fills that void. I enjoy that, and it gives me a sense of staying in touch and a sense of relevance that, at least for me, is very important,” Mr. Fullen added. 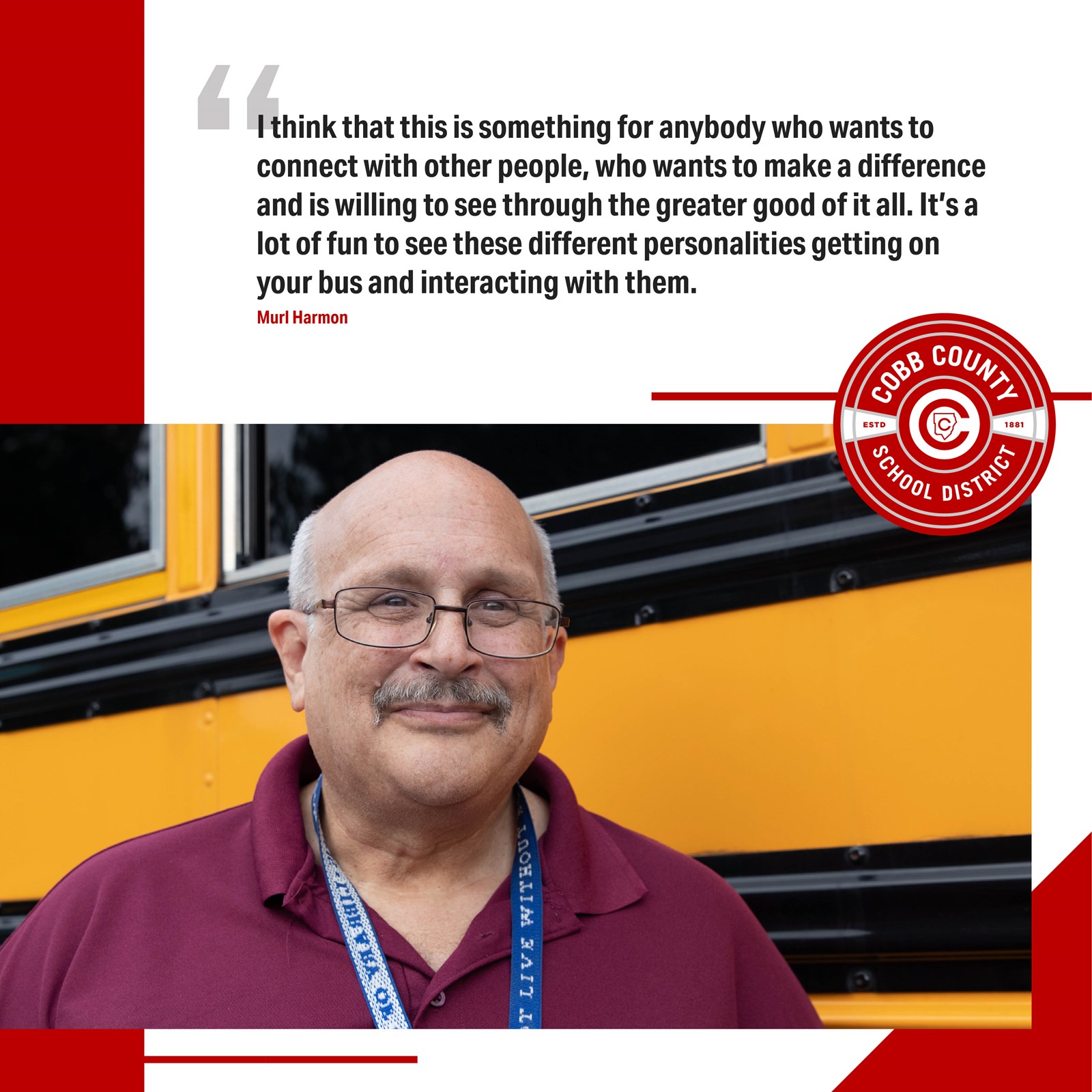 “Every Friday, if we're really good on the bus, we get a magic trick. They look forward to that. As a matter of fact, they always ask, ‘Is it Friday yet? Is it Friday yet?’ They all know it isn't, but they still ask anyway, and it's a lot of fun,” revealed Cobb’s magic school bus driver.

The kids love his magic, but he has his own reasons for loving his job as a Cobb Schools bus driver besides getting to drive his own granddaughter to school.

“I think it's about the connection with the kids and with the other bus drivers,” Mr. Harmon said. “It's the camaraderie. It's the brother and sisterhood of being a bus driver. I have yet to meet somebody who says I can't stand my job. I haven't met that person yet, and that's amazing.”

Beyond all the paid benefits, like health and dental insurance and paid summers, Mr. Harmon points to another reason that gets bus drivers, like himself, excited about their jobs.

“I think the biggest compensation, the biggest thing is when you at the end of the year, get that folded piece of paper with the kids writing on it that says, ‘you're a really good bus driver,’ and then you get like a $10 gift card or something. You can't put a price on that,” said the East Cobb area bus driver.

Mr. Harmon only has one regret.

“I'm just sorry I didn't start out a couple of years sooner,” he said.

Ms. Martinez tells an inspiring story of how divine intervention led her to apply for a job as a 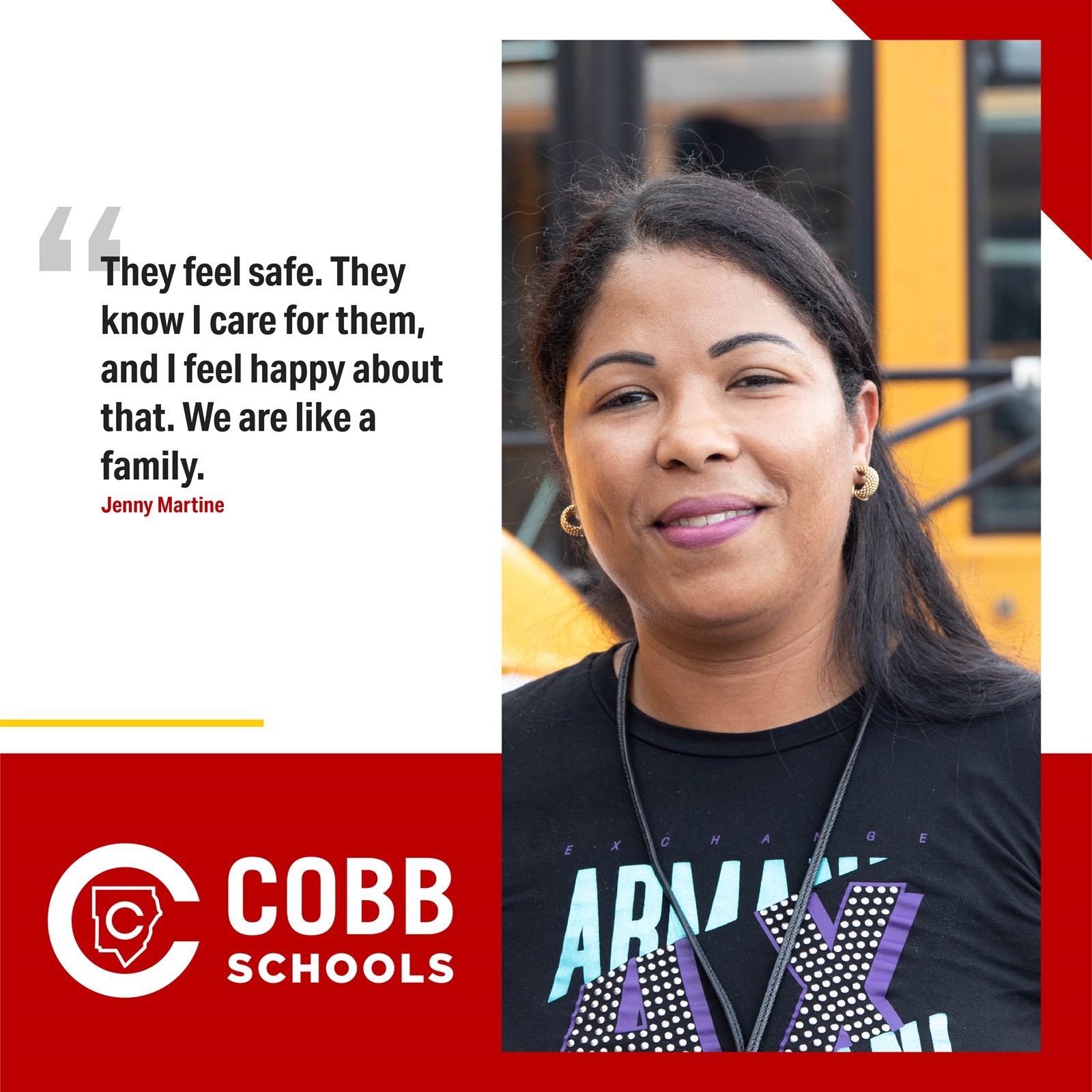 school bus driver. The honk of a school bus and a wave from the driver caught her attention when she was considering what job to pursue with young children at home. With the help of a neighbor, she applied and secured one of the only slots available for the training that would prepare her for her life-changing job as a school bus driver.

“That's why I became a bus driver, because the Lord sent me over,” Ms. Martinez declared.

The competitive paid benefits available to Cobb Schools bus drivers are not what motivates Ms. Martinez to buckle into the driver’s seat every day. She does it for the kids.

“My kids, I love to say good morning to them. Every morning we have a big smile, and I love when they come on the bus,” Ms. Martinez explained. “They feel safe. They know I care for them, and I feel happy about that. Because every time you say good morning, they feel the love.”

She has her own advice for those considering a job as a Cobb Schools bus driver.

“I would say to follow what is in your heart. Come and do it because you love it, and you want to be with the kids. You want to treat the kids as of yours,” she advised. 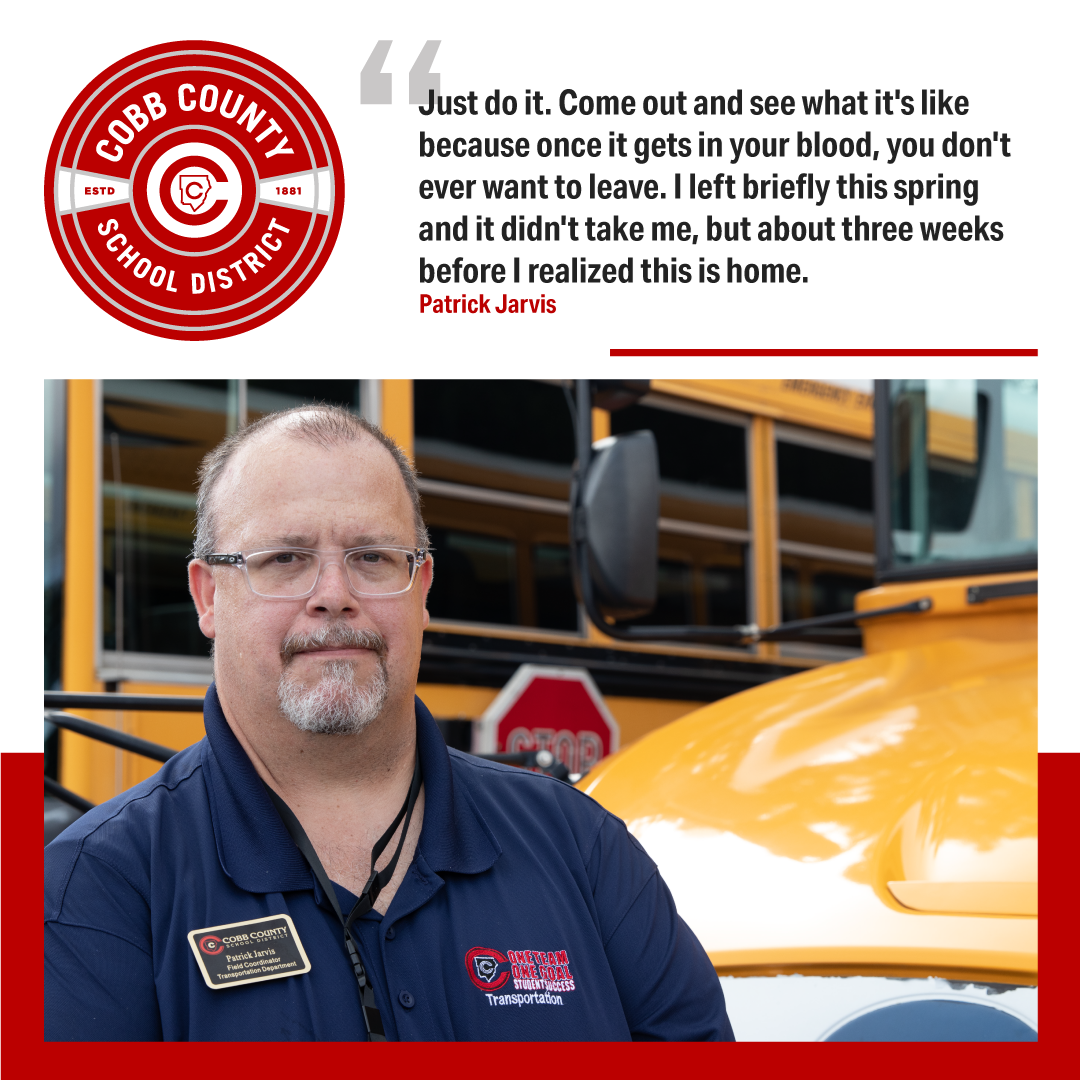 When Patrick Jarvis signed on as a Cobb Schools bus driver, the flexible schedule met his family’s needs, which his prior job in healthcare could not. However, once he was part of the team, he didn’t want to give up the driver’s seat. The job allowed him to serve in the same school system as his son, which meant having the same days off. He also looked at the job as a way to make a difference in his community.

“The school bus has changed my life,” said Mr. Jarvis. “You will love this job. Once you start this job, you can't imagine the benefits that you get from it. Knowing that you are helping a student get through their educational career. That student could be the next president. That's going to be the next doctor that saved your life when you're older, and just knowing that you had a small part of that, just getting them to and from school is why I say leave what you're doing and come here.”

The Cobb Schools bus driver and field coordinator understands that some may be nervous about driving a large vehicle like a school bus. He says not to worry. Cobb Schools has a team of trainers to help new drivers prepare for their road test.

“I tell [new drivers] all the time when I'm driving with them that if I didn't trust you driving, you wouldn't be in the seat,” assured the veteran bus driver. “We take them and get them comfortable in a parking lot before we go out onto the road. We teach them what is needed, and then [new drivers] go to take the test. We have our own examiners as well. Those examiners take them out on their CDL test.”

Take the advice of these veteran bus drivers, like Mr. Jarvis, and apply to become a Cobb Schools bus driver today.

“Just do it! Come out and see what it's like because once it gets in your blood, you don't ever want to leave,” Mr. Jarvis declared. “I left briefly this spring, and it didn't take me but about three weeks before I realized this is home.”