Thanks to a gig as a volunteer with a youth orchestra program and his early teaching jobs while still in school, Mr. Palmer was inspired to continue sharing his love of music with students. He has done just that for more than 30 years with no plans to stop. The seasoned orchestra director has called Allatoona High School home since 2008.

Students credit their beloved teacher for being their mentor and keeping their love of music alive.

One current student earned enough high school credits to graduate early, but instead, he opted to stick around and take a few more classes with his favorite orchestra teacher. 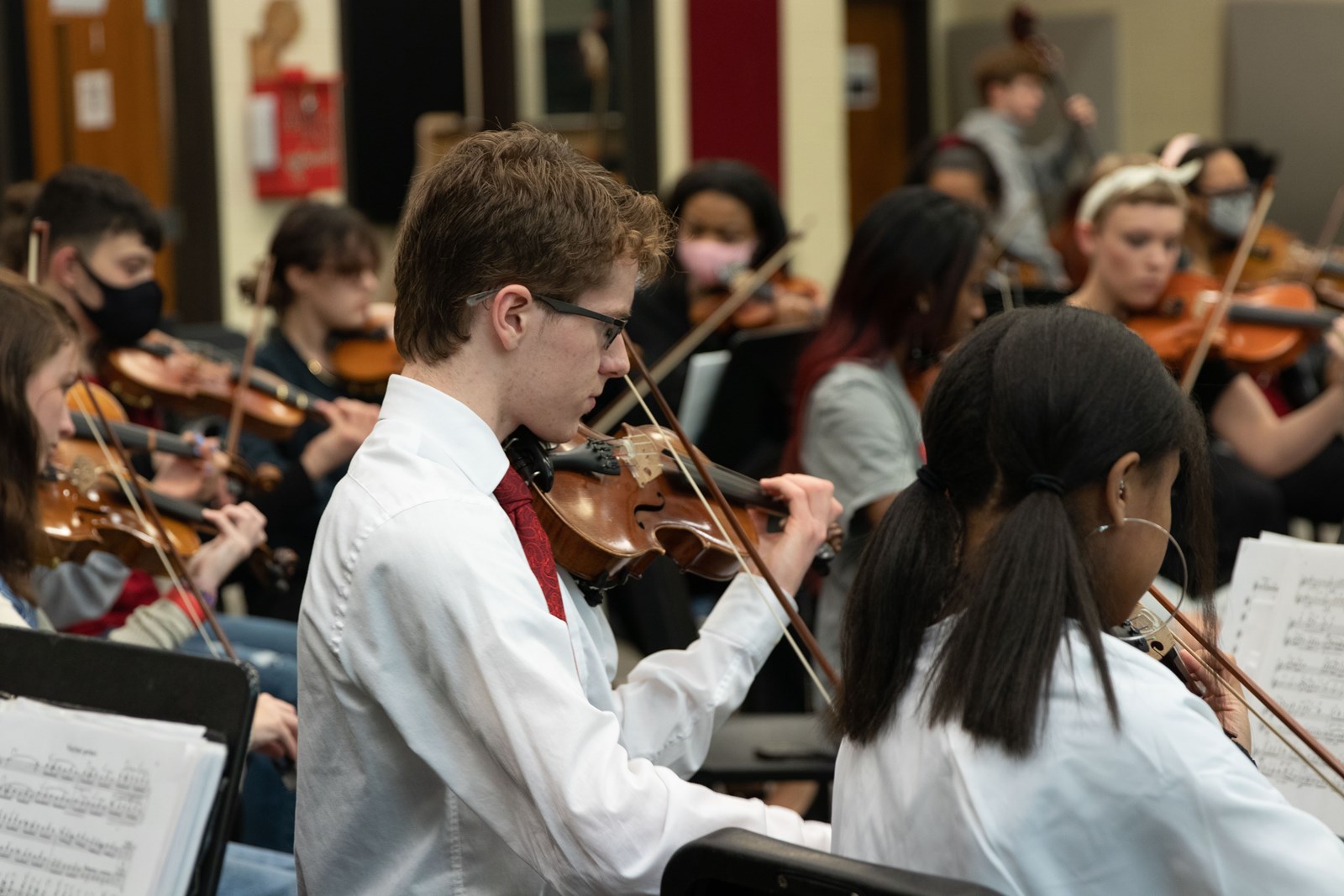 “He’s an amazing teacher, and I want to be able to learn as much about what he does, how he does it, and how he thinks because that’s the dedication I want to have whenever I grow up and whatever I do. I want to have that dedication,” senior Garrett Wilson explained when asked why he chose to take more classes than needed with Mr. Palmer.

Garrett does not just look to his 4-year high school orchestra teacher for guidance on improving his violin skills. He looks to Mr. Palmer for help on college decisions and the classes he should take.

“He’s good at getting people motivated and excited to make music, and he also does it in a way to where we learn about life,” Garrett added.

Of course, it all comes back to the music.

“He wants us to enjoy music for life,” the senior violinist added. “He’s also teaching us, so we develop a lifelong passion for music, even if we’re not majoring in it. Also, [he is teaching us] so we just have better lives in general. It’s one of the things he’s told us before, and I just think everything he does is for those reasons.” 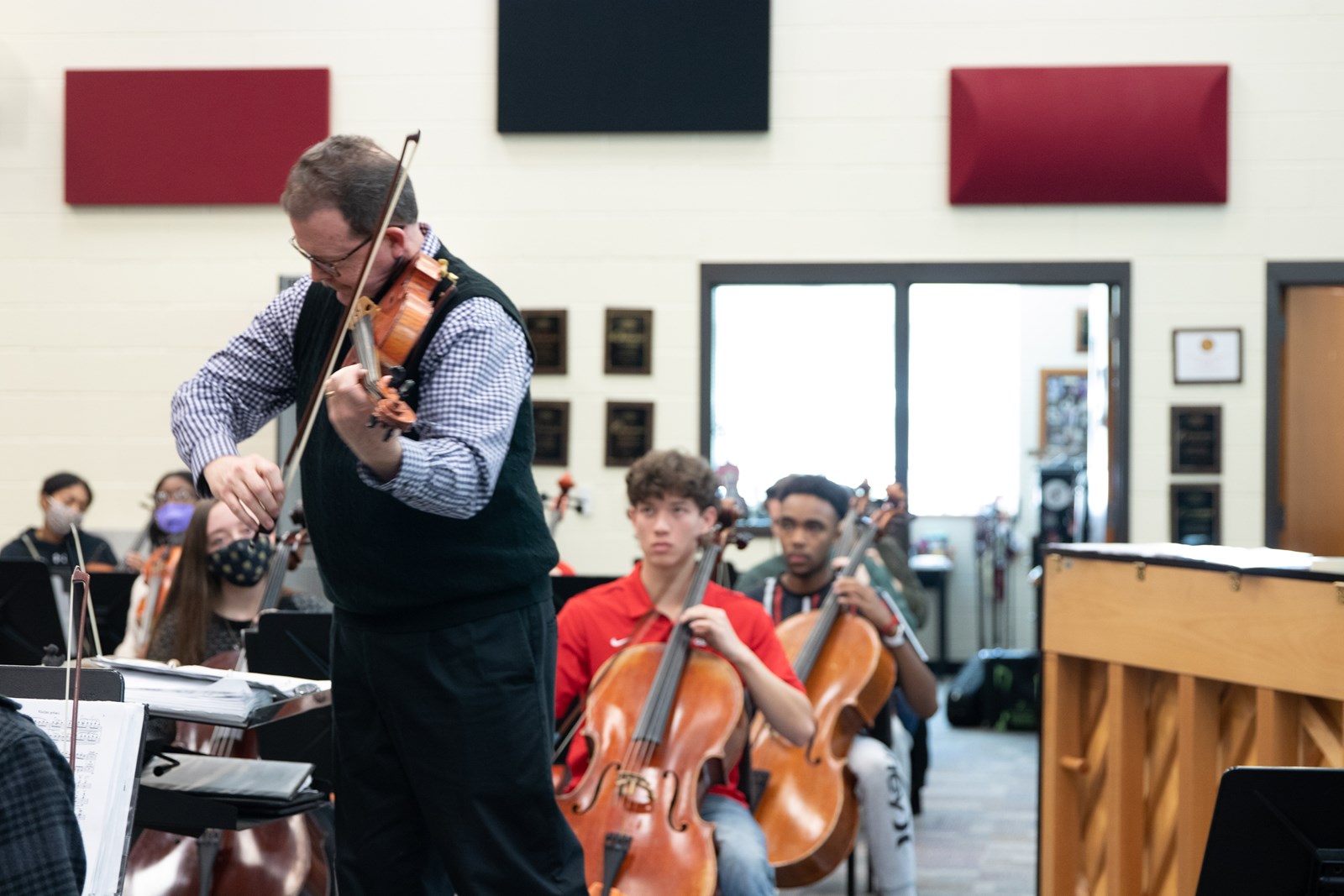 That is precisely his orchestra teacher’s goal.

“So, through music, I can teach them sensitivity and accountability. I can teach them the love of the arts. All of that is important. I would say my overlying goal for them is that they are productive, happy citizens,” Mr. Palmer revealed.

Another one of Mr. Palmer’s seniors, Kimberly Lyla looks to music as a great stress reliever and a break from her rigorous academic and sports schedule. 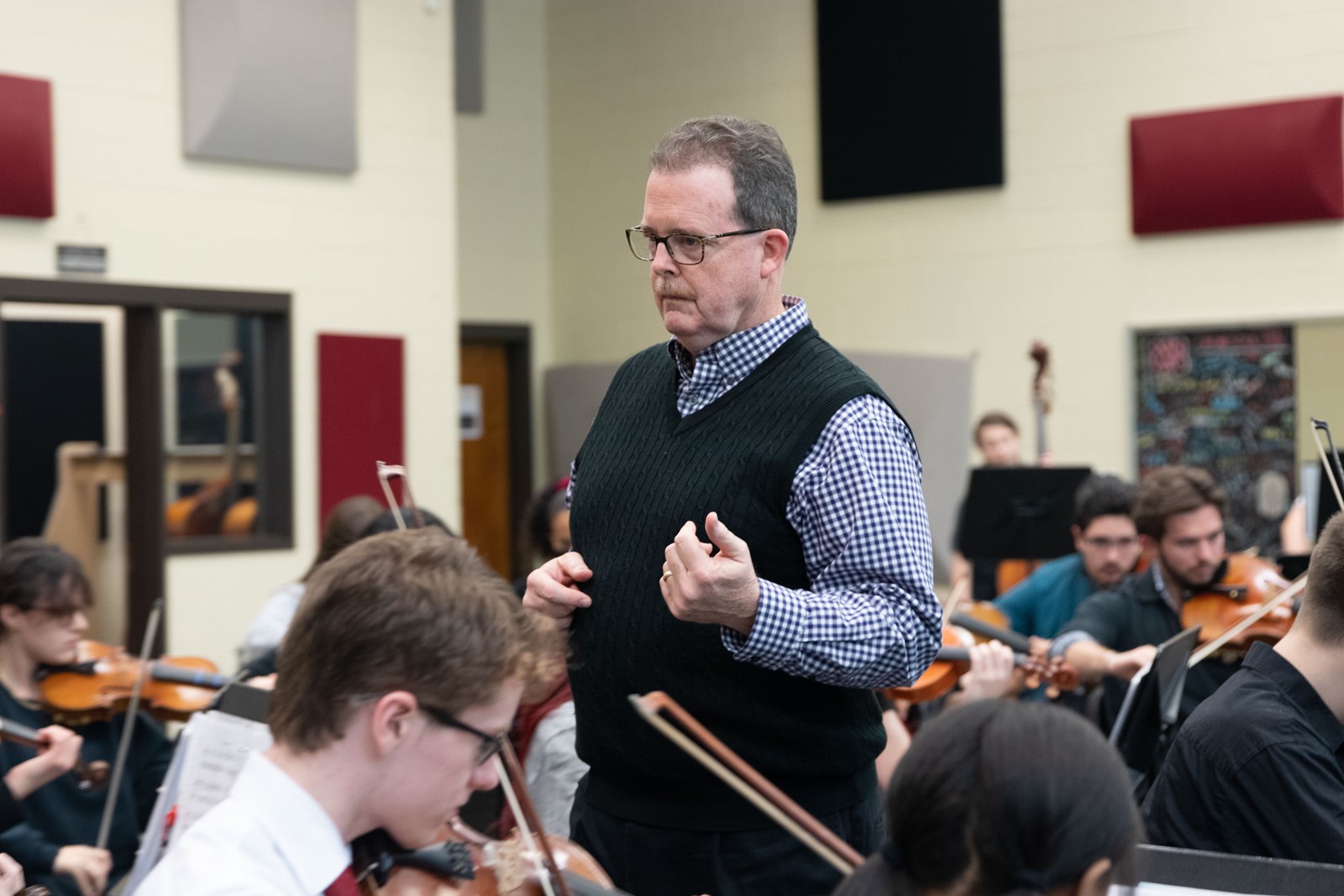 Like her classmate Garrett, Kimberly also credits her orchestra teacher for some of the life skills she has learned in high school.

“Mr. Palmer has taught me to be on top of things and stay organized, especially since [I am on the] student board. I am the president, so it kept me organized with all the social events that we do,” Kimberly added.

It is no coincidence that Kimberly and other students developed skills that helped them in other academic areas. 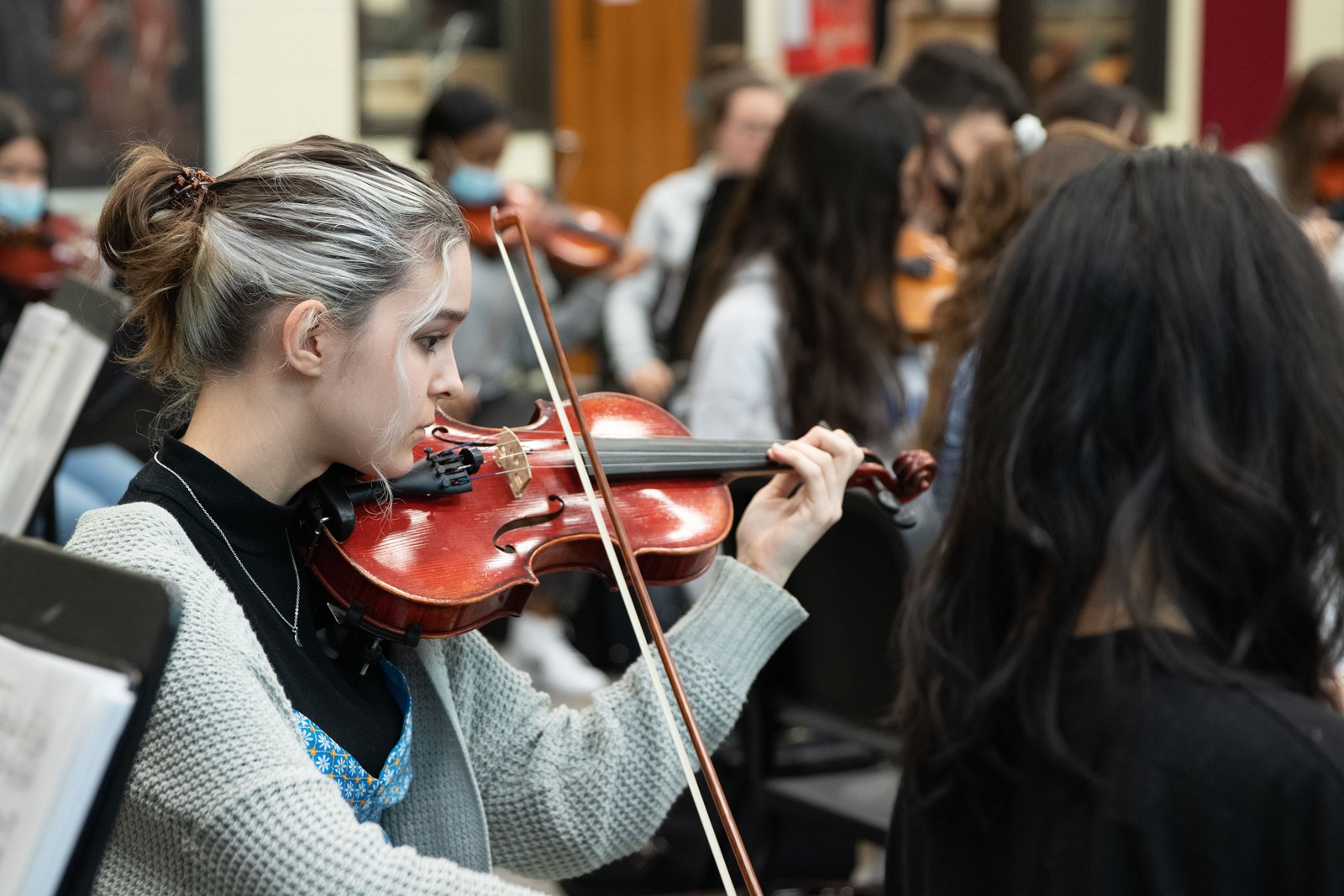 “There is a big connection between music and math. The rhythm side of music uses the left brain, which is the same side of the brain that math uses in calculations. I feel the important connection between music and academics is the discipline. In order to play an instrument or to sing at a high level, it requires slow practice and slow dedication, and it’s a discipline,” the 30-year educator explained.

Beyond the music, it is Mr. Palmer’s teaching style that keeps the students coming back year after year. Mr. Palmer talks to each student before and after class. He makes them feel heard. 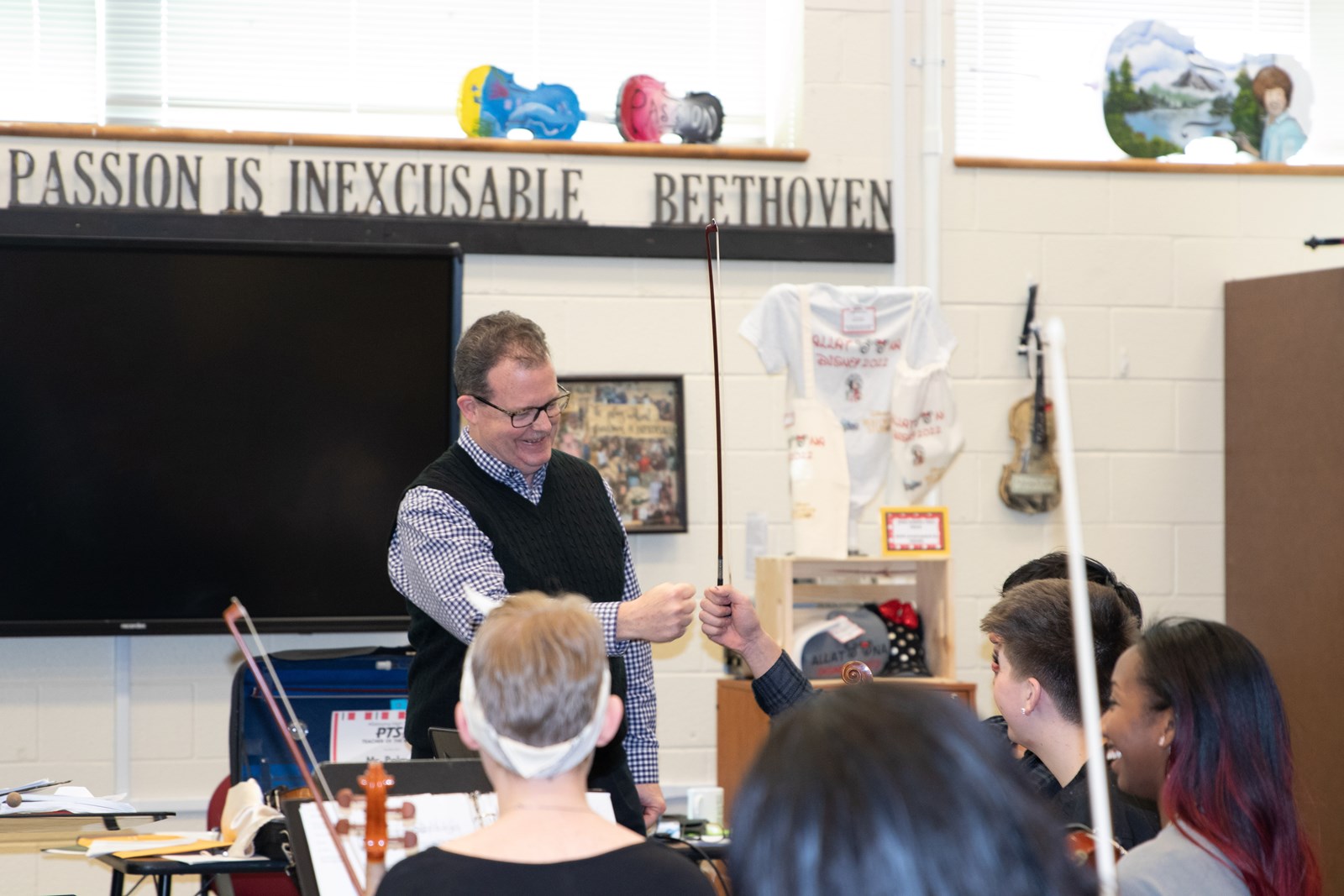 “I want everyone to look at you because you played amazing.”

Those are a few of the examples of praise that ring out inside Mr. Palmer’s orchestra classes.

“I like how he talks to us individuals,” Kimberly applauded. “I like that he’s honest, and he’s also energetic, so he does keep us focused.”

Kimberly has enjoyed her time in Allatoona’s orchestra so much that she was quick to recommend the class to her little sister. 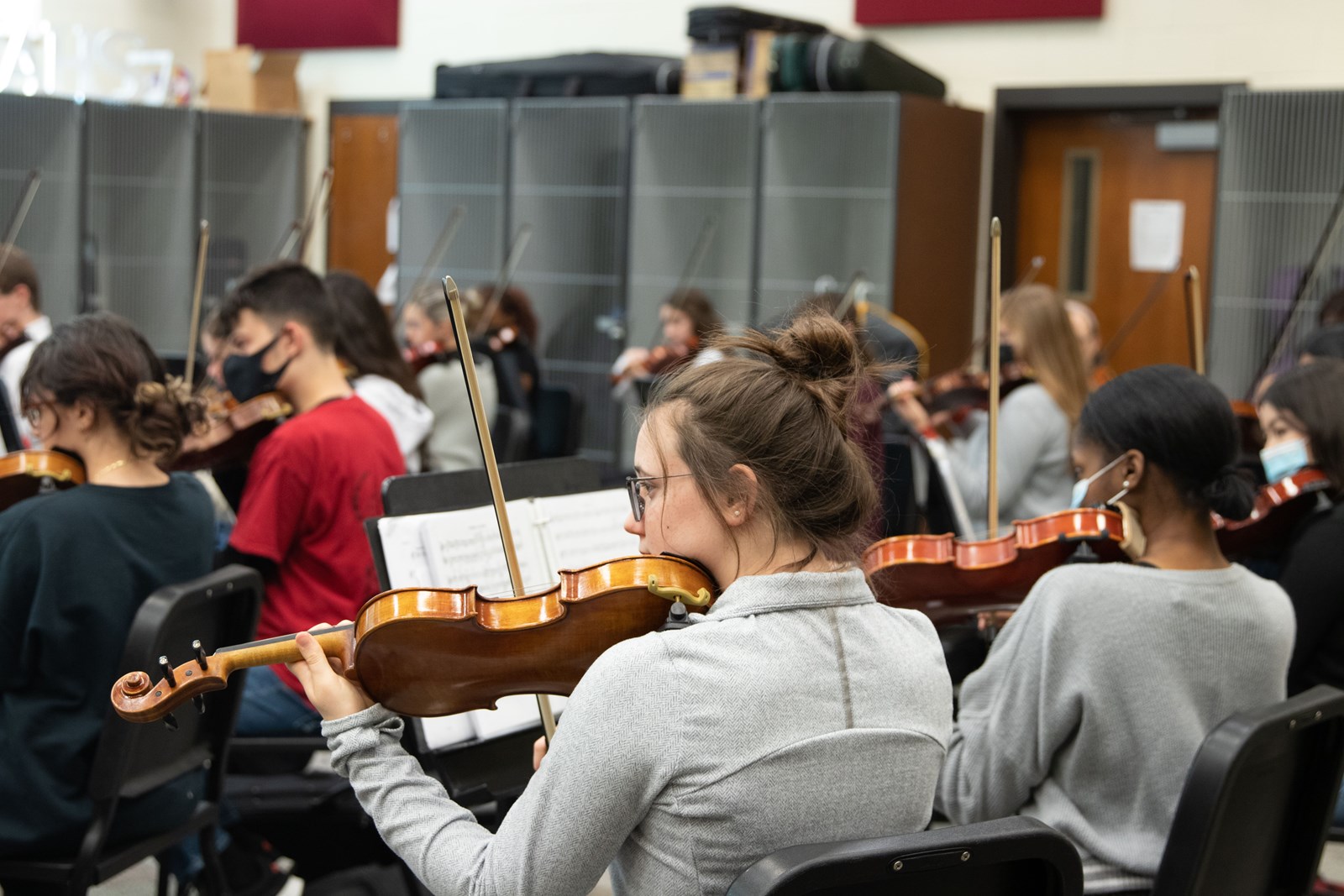 Mr. Palmer is nearing one of his favorite days, which happens to be one of his saddest days, as he prepares to bid farewell to students like Garrett and Kimberly.

“My two favorite days are when they first walk into the orchestra room as a ninth-grader because their potential is limitless. The other favorite day is when they walk across the stage at graduation. All the seniors are actually graduating to the sounds of their orchestra. That’s a great day because when they walk across the stage, I think that person is now equipped to love music for the rest of their life,” revealed the veteran educator. 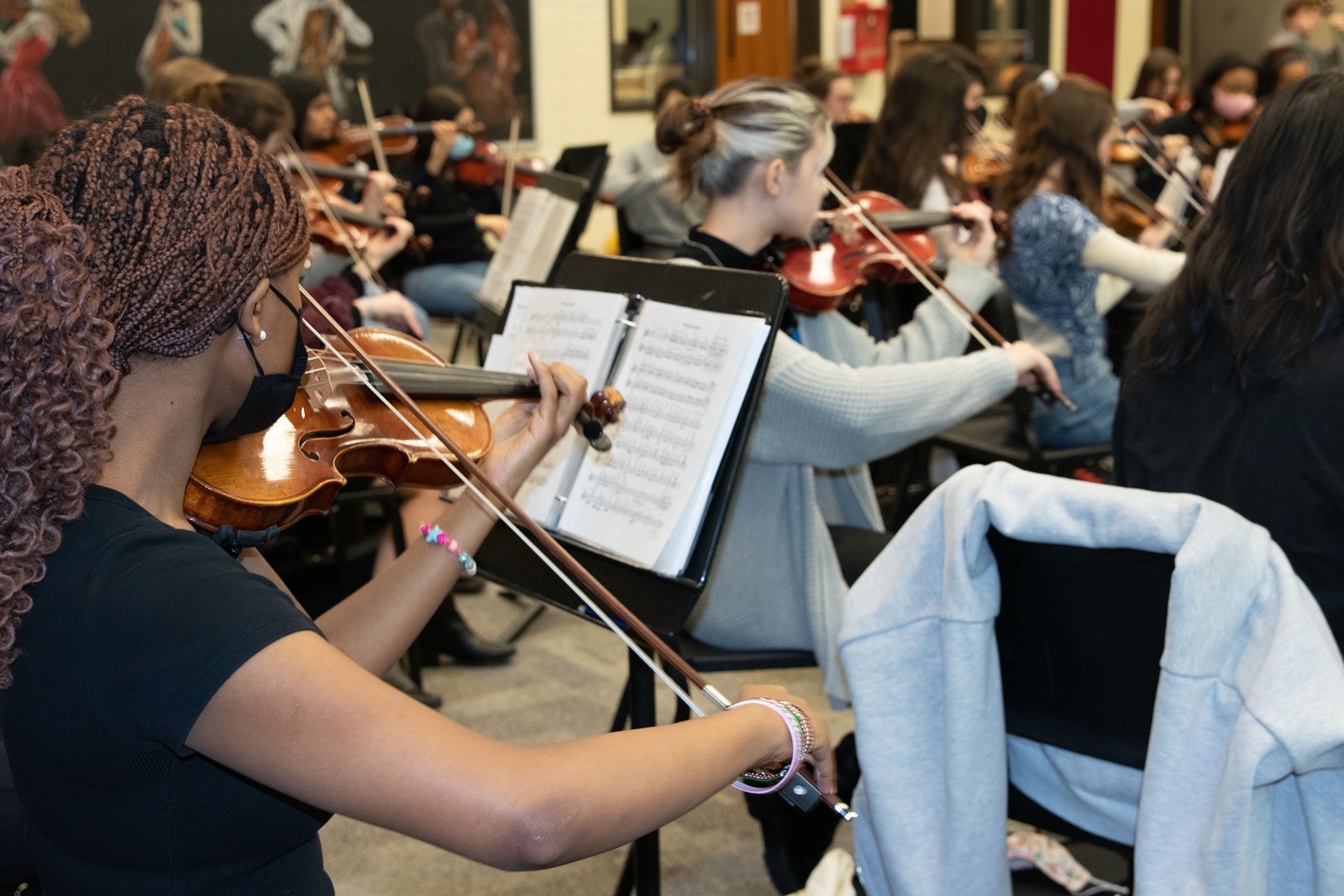 All the seniors in the orchestra will have one more time to play together on graduation day. They will play as their fellow seniors march in wearing their caps and gowns. The Allatoona orchestra students will then rise and parade to their seats with the other graduates as their younger classmates keep the music alive.

Not all Mr. Palmer’s orchestra students go on to major in music, some play in regional orchestras or freelance as musicians. Some of his students follow even closer in the footsteps of their beloved orchestra teacher. His students have gone on to pursue music education and music therapy careers. Two of his former students are student teaching in Cobb Schools this spring, and he is hoping they’ll stay in the District. That’s his plan for them.

Although she may not have been one of his students, there is one teacher in Cobb Schools who was definitely impacted by Allatoona’s famed orchestra teacher and was led to join the Cobb Schools team. 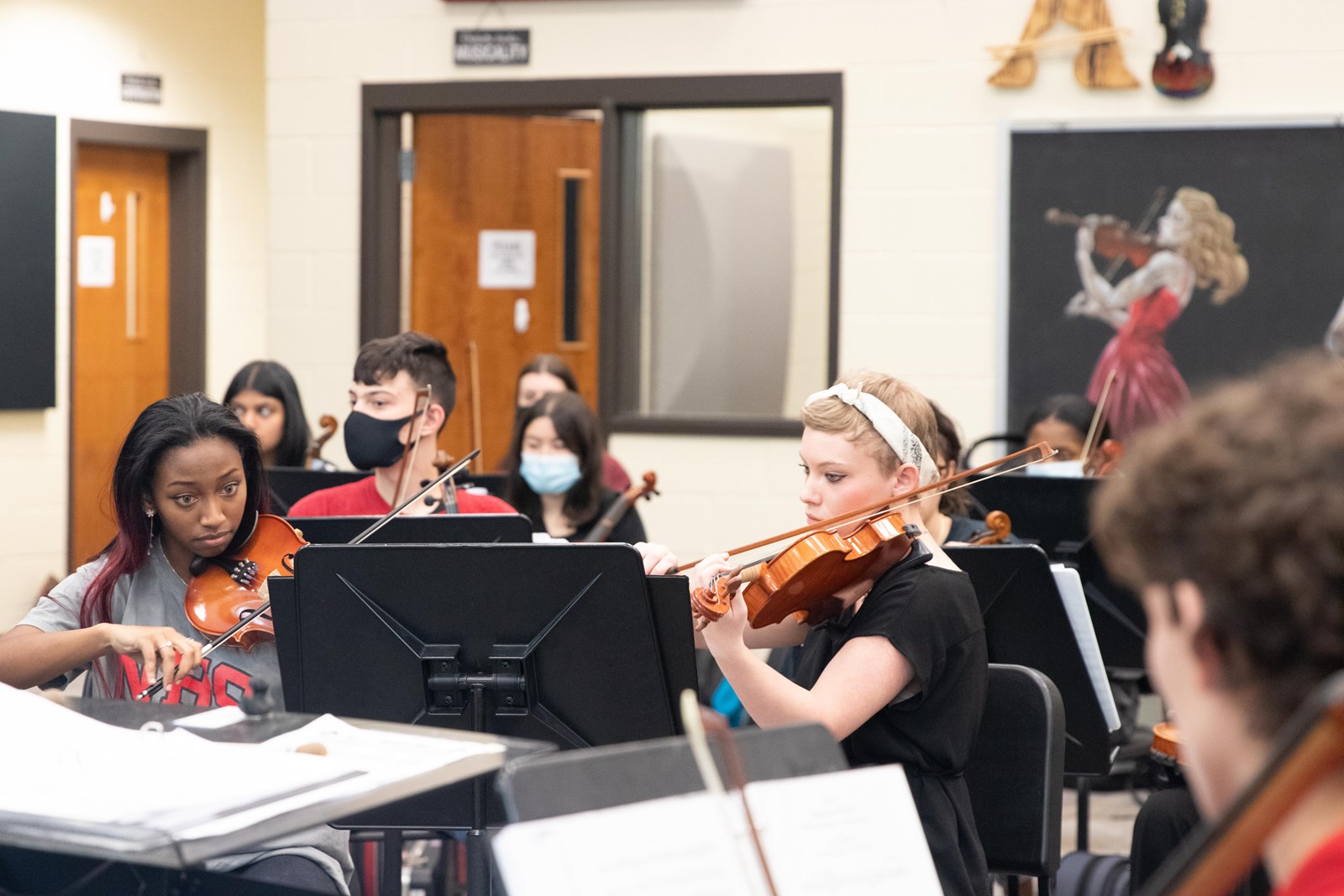 “She graduated here from Allatoona. She was in the chorus program and the theater program, and our theater teacher, Ms. Traci Woody-Kemp, had a huge impact on her life as well. She loved it so much that she wanted to get her degree and come and teach in Cobb.”

When a part-time job opened up in Cobb, Mr. Palmer told his daughter she couldn’t pass up the opportunity.

“I said, you have to take it to be a first-year graduate and get a music job in Cobb is a big deal. So, after one year, she grew the program, and they made her full-time. She just loves every second of it,” her proud dad praised. 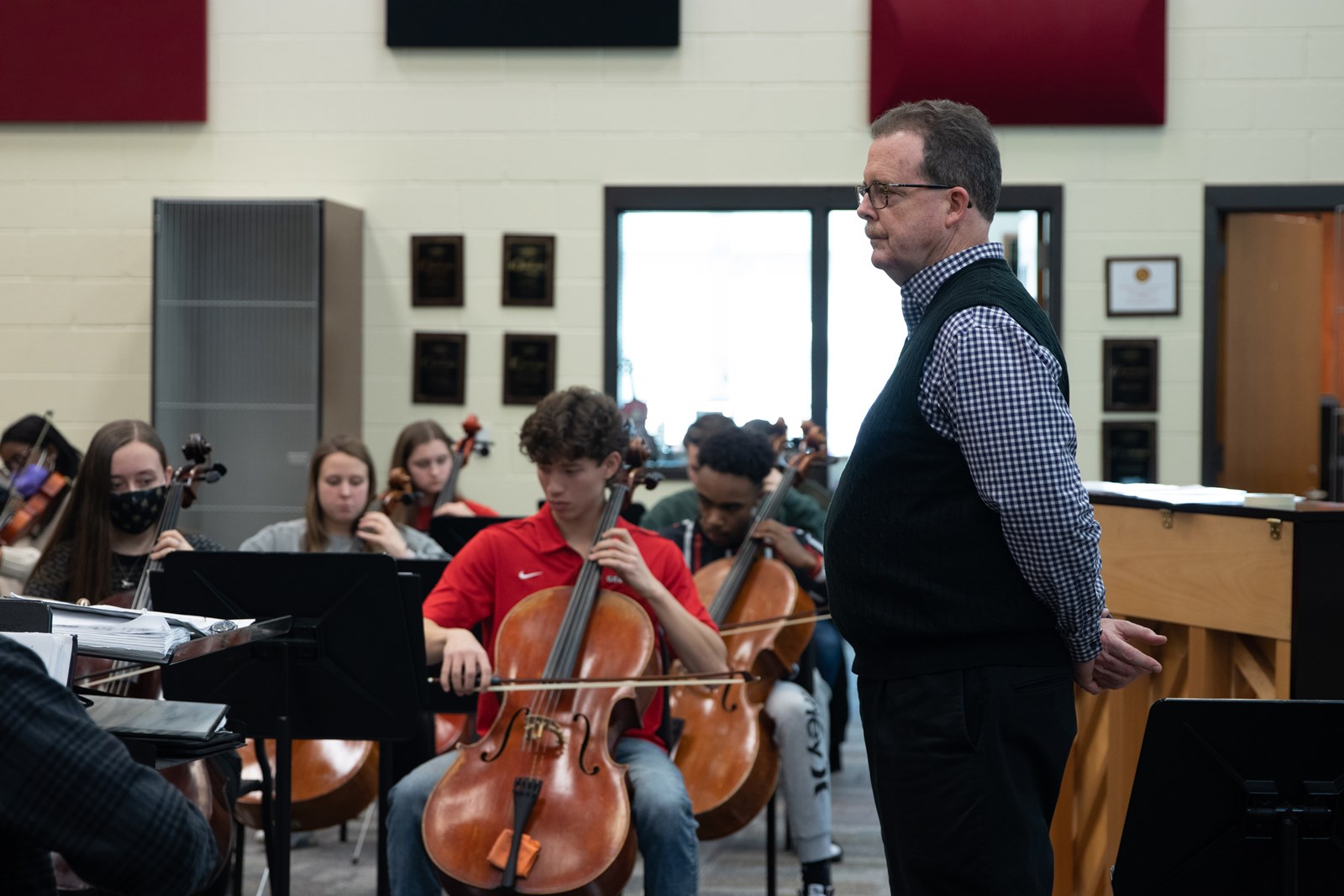 Even before Mr. Palmer moved to Georgia and Cobb, he knew the reputation of the Cobb Schools music department, which has now been named one of the best communities in the nation for music education for the 20th year.

When he attends national music conventions and clinics, he is reminded that the Cobb Schools name is known throughout the nation.

“So, when I’m at a national conference, and they see Allatoona High School, Cobb County, Georgia, they always say, ‘Oh, you teach in Cobb County. You must be from a great program,’” Mr. Palmer recalled. “Of course, I can always say, ‘absolutely nothing but greatness comes out of Cobb.’” 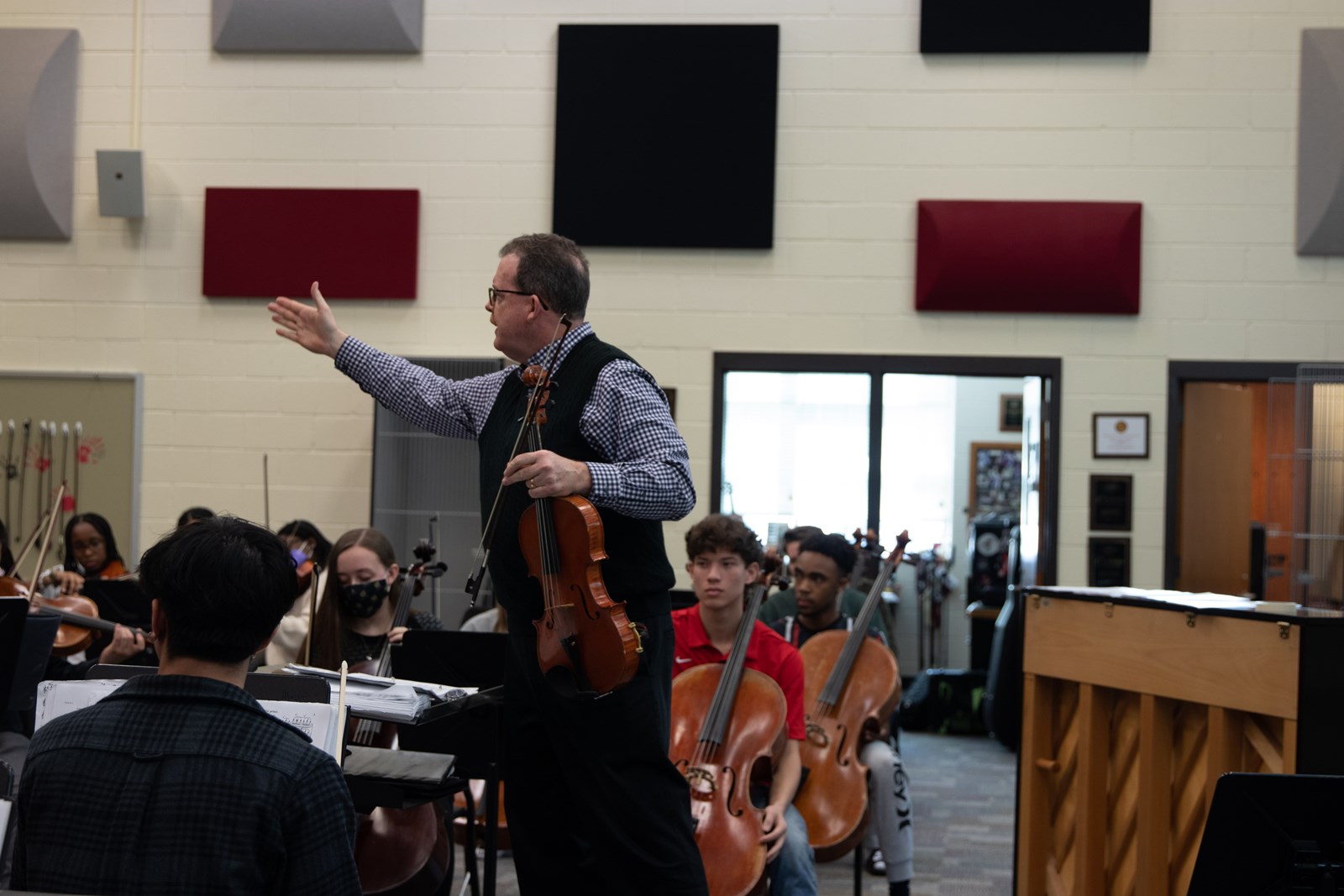 For Mr. Palmer, it is important to keep music alive in the hearts of his students so they carry that with them after graduation.

“Music provides them an opportunity to connect with other humans and other people that they share common grounds with, and maybe that they have differences on a more global approach,” Mr. Palmer said. “Society is incomplete without music. Music expresses those emotions that we can’t say with words.”