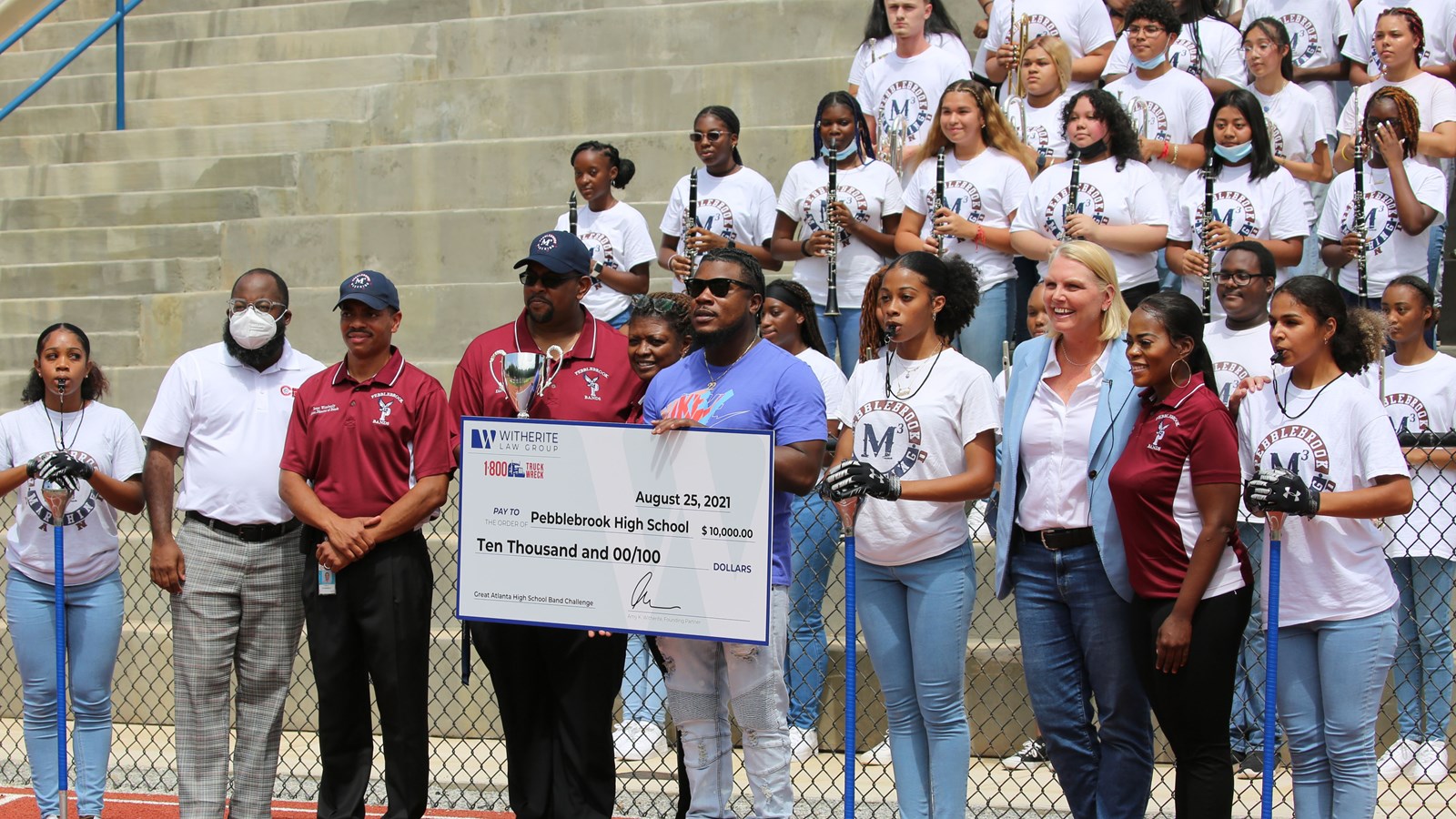 "There are so many fantastic high school bands here in Atlanta," said attorney Amy Witherite. "We needed a contest to bring them all together and find out who the best of the best is. It was really Radio One's idea, but we are more than happy to be a part of it."

Along with 107.9 DJ, Incognito, Ms. Witherite visited the Pebblebrook campus on Thursday, August 25, to make a significant announcement to Mighty Marching Machine. Assembled in the stadium bleachers, the band anxiously awaited the news.

35 Atlanta-area bands competed in the contest. With the late August sun high in the sky, Ms. Witherite informed the Pebblebrook performers that they were one of the three top bands in the area, earning their program a $10,000 prize.

"Fantastic work," she said, congratulating the band and their director Eulas Kirtdoll. "We know how much effort went into this. We're tickled to support you. I've heard you play by watching videos online, but now I'm excited to hear what you got in person."

The Mighty Marching Machine proceeded to oblige and shook the stadium in celebration of the big check that will be used to help purchase new instruments and uniforms.

"We are so encouraged by the generosity of others," said Mr. Kirtdoll. "They didn't have to do this; they chose to do this. People all over the United States and even internationally voted for us. We want to send a very special thank you to Lassiter's Band and Director James Thompson for voting for us and supporting us. We're so appreciative!"

Post 3 School Board member Mr. Tre' Hutchins was also in attendance for the special day. "Twenty-eight years ago, I was part of the Mighty Marching Machine here at Pebblebrook," he said to cheers from the current band. "This group of students has put Pebblebrook on the map. This school is known all across the metro Atlanta area because of its example of excellence in music. I can't say enough about them."

"This is the best band in the land," said Pebblebrook Principal Dr. Dana Giles. "It's filled with students who are musically and academically amazing."

"You get more scholarships than any other group in the school," she continued, addressing the band members. "You represent Pebblebrook well. Thank you for your time and dedication and also for your parents' support."

Dr. G. also thanked Ms. Wirtherite directly for her enthusiastic support. "I don't know how all of this developed," she said, "but we are filled with gratitude right now. We knew we had to enter this contest when we heard about it because it's true: We are the best band in the land. Thank you for the gift, and thank you for being here today."

With that, the Mighty Marching Machine stood up for one final anthem to close out the celebration. Thank you to Radio One, Witherite Law Group, and 1-800-Truck-Wreck for making all of this possible.

Congratulations to Principal Giles, Director Kirtdoll, Associate Director Isaac Wimberley, and all the members of the Mighty Marching Machine for showing the Atlanta area what a talented group resides at Pebblebrook High School!